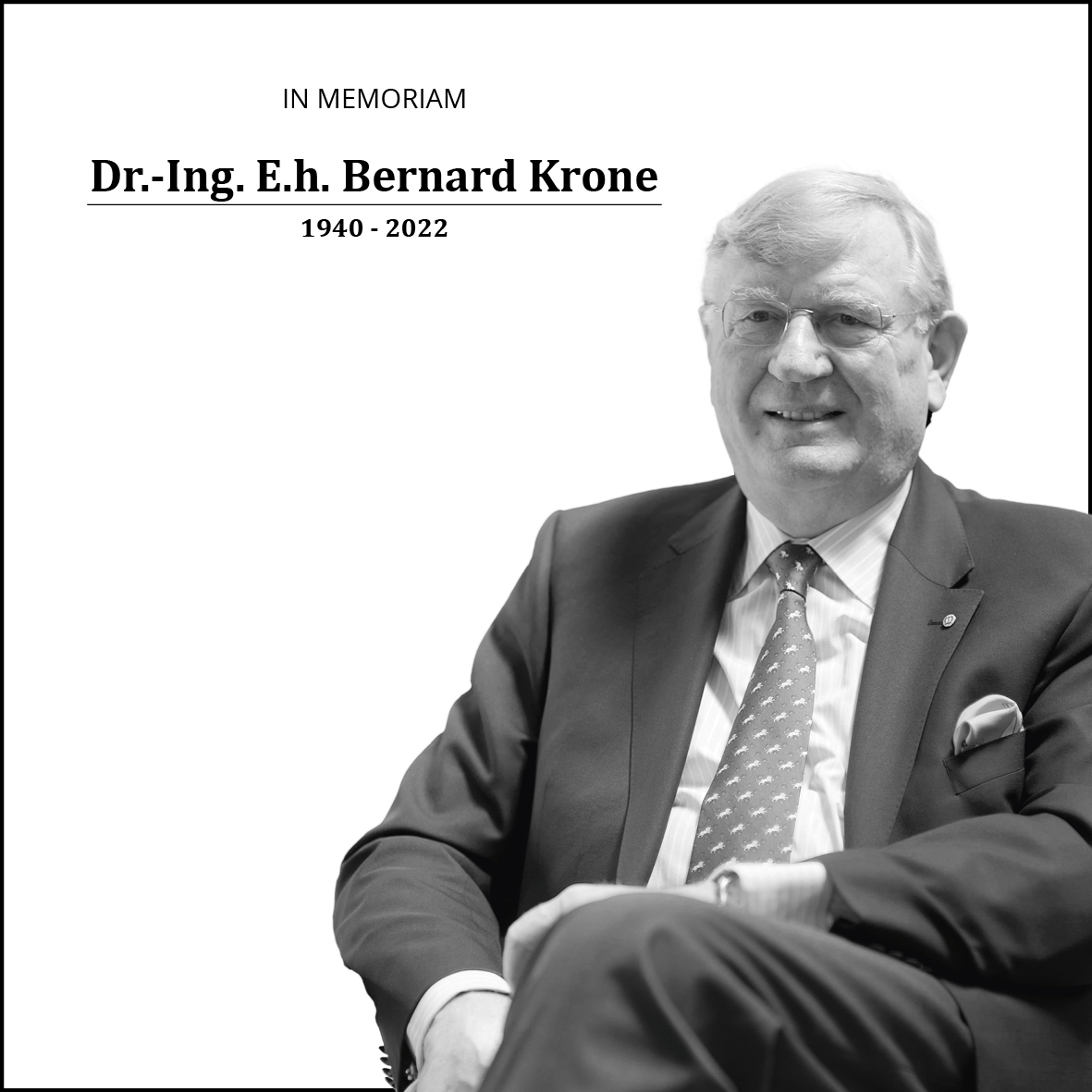 It is with deep sadness that we inform you of the passing of long-time owner of the KRONE Group, Dr.-Ing. E.h. Bernard Krone, after a short serious illness in Spelle, Emsland, on October 14th, 2022 at the age of 82.

His passing is not only mourned by his family and relatives as well as more than 7,000 employees, but also the international agricultural engineering and European commercial vehicle industry, which the passionate family entrepreneur Dr Bernard Krone decisively shaped through his many years of work. Being in close contact with customers – the personal interaction with the people in the industries – has always been particularly close to his heart.

Dr Bernard Krone was regarded as a visionary man of action. His life motto was inspired by the philosopher Dante Alighieri: “One waits for the times to change, the other seizes them and acts”, and he acted – naturally. He continuously developed the company and made ground-breaking decisions to diversify the business: In addition to entering the commercial vehicle sector, he established, among other things, self-propelled technology in agricultural engineering and specialized the Krone company in forage harvesting technology. He thus shaped the corporate group over many decades, developed products and set the course before officially retiring from the operational business in 2010 and handing over the helm to his son Bernard Krone. With the early arrangement of the company succession for the benefit of the Krone Group, he once again demonstrated entrepreneurial foresight. His most important advice to his successor: “Always remain the blacksmith from Emsland like your great-grandfather, your grandfather and your father.”

His commitment had an impact far beyond the boundaries of the company. He was also fully devoted to association work: at the Chamber of Commerce and Industry, in the Agricultural Machinery and Farm Tractor Association (LAV), as President of the European Agricultural Machinery Industry Association (CEMA), in the Association for Mechanical and Plant Engineering (VDMA), as longstanding Vice President of the German Association of the Automotive Industry (VDA), and as Chairman of the “Trailers, Special Bodies and Buses” manufacturers’ group. His achievements have been recognized time and time again. The Institute of Technology of the University of Braunschweig awarded him an honorary doctorate. He received the Tilo-Freiherr-von-Wilmowsky Medal for “many years of valuable impulses for the benefit of people employed in agriculture”, the Max-Eyth-Denkmünze in gold, and the former Prime Minister of Lower Saxony, Christian Wulff, presented him with the Cross of Merit on Ribbon of the Order of Merit of Lower Saxony. Prime Minister President Stephan Weil awarded him with the Cross of Merit 1st Class of the State of Lower Saxony. In addition, Dr Bernard Krone received the LEO industry award in the category “Innovation/Idea” for the concept of the well-known long truck combination. He was also awarded the Emsland Medal, the Grashof Denkmünze – the highest award of the Association of German Engineers – and the “Grossen Wagen” of the Bundesverband Güterkraftverkehr (BGL). The VDA appointed him an honorary member in 2013.
Dr Bernard Krone grew into the company from the very beginning. From childhood, he was often allowed into the factory and to visit customers. As a 6-year-old pupil, he told his teacher that he could learn more in the workshop than at school. Of course, he continued to attend anyway, completed an apprenticeship after graduation and then began his academic training as a mechanical engineer in Cologne in 1959, as the youngest student at that time. Three years later he successfully completed his studies and joined the company. His father then sent him to Ireland to spend time abroad. He wanted to prepare him as early as possible to take over the company. In 1970, his father passed suddenly and much too early. As sole heir, he took over the company’s agricultural machinery production in Spelle. His father left big shoes to fill for Dr Bernard Krone, but it was a matter of course for him to take on the responsibility.

In his private life, the father of three and multiple grandfather was committed to the interests of nature in his home region and beyond as a passionate hunter and farmer. Active participation in and promotion of local associations were, of course, an integral part of his work.

Even though the death of Dr Bernard Krone leaves a deep cut in the soul of the company, the lived values of the far-sighted yet down-to-earth Emsland native form the basis for the sustainable success of the company to this day. Honesty, reliability, straightforwardness – these are terms by which many companions describe him full of esteem. It was always important for him to be a role model and to actively live this role. The family, the entire company management and all employees will continue his life’s work with commitment for generations to come.